.NET is a major technology change for Microsoft and the software world. Just like the computer world moved from DOS to Windows, now they are moving to .NET. But don’t be surprised if you find anyone saying that “I do not like .NET and I would stick with the good old COM and C++”. There are still lot of people who like to use the bullock-cart instead of the latest Honda car.

The simple answer is ‘it is the technology from Microsoft, on which all other Microsoft technologies will be depending on in future.

.NET framework comes with a single class library. And thats all programmers need to learn!! Whether they write the code in C# or VB.NET or J#, it doesn’t matter; you just use the .NET class library. There is no classes specific to any language. There is nothing more you can do in a language, which you can’t do in any other .NET language. You can write code in C# or VB.NET with the same number of lines of code, same performance and same efficiency, because everyone uses same .NET class library.

In future versions of Windows, .NET will be freely distributed as part of operating system and users will never have to install .NET separately.

Whether you write code in C# or VB.NET, you are calling methods in the same .NET class libraries. The same .NET framework executes the C# and VB.NET applications. So, there won’t be any performance difference based on the language you write code.

The CLR is the platform on which applications are hosted and executed. The CLR also provides a set of services that applications can use to access various resources (like arrays, collections, operating system folders etc). Since this runtime “manages” the execution of your code, code that works on the CLR is called as managed code. Any other code, you guessed it, is called unmanaged code.

The following are some of the benefits of the CLR:

The .NET assembly is the standard for components developed with the Microsoft.NET. Dot NET assemblies may or may not be executable, i.e., they might exist as the executable (.exe) file or dynamic link library (DLL) file. All the .NET assemblies contain the definition of types, versioning information for the type, meta-data, and manifest. The designers of .NET have worked a lot on the component (assembly) resolution.

There are two kind of assemblies in .NET; 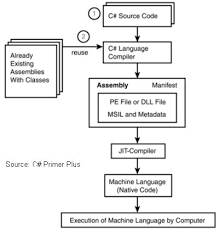 When we compile our .Net Program using any .Net compliant language like (C#, VB.NET, C++.NET) it does not get converted into the executable binary code but to an intermediate code, called MSIL or IL in short, understandable by CLR. MSIL is an OS and H/w independent code. When the program needs to be executed, this MSIL or intermediate code is converted to binary executable code, called native code. The presence of IL makes it possible the Cross Language Relationship as all the .Net compliant languages produce the similar standard IL code.

Earlier we used the term ‘.NET Compliant Language’ and stated that all the .NET compliant languages can make use of CLR and FCL. But what makes a language ‘.NET compliant language’? The answer is Common Language Specification (CLS). Microsoft has released a small set of specification that each language should meet to qualify as a .NET Compliant Language. As IL is a very rich language, it is not necessary for a language to implement all the IL functionality, rather it meets the small subset of it, CLS, to qualify as a .NET compliant language, which is the reason why so many languages (procedural and OO) are now running under .Net umbrella. CLS basically addresses to language design issues and lays certain standards like there should be no global function declaration, no pointers, no multiple inheritance and things like that. The important point to note here is that if you keep your code within CLS boundary, your code is guaranteed to be usable in any other .Net language.

.NET also defines a Common Type System (CTS). Like CLS, CTS is also a set of standards. CTS defines the basic data types that IL understands. Each .NET compliant language should map its data types to these standard data types. This makes it possible for the 2 languages to communicate with each other by passing/receiving parameters to/from each other. For example, CTS defines a type Int32, an integral data type of 32 bits (4 bytes) which is mapped by C# through int and VB.Net through its Integer data type.

CAC is an ISO 9001:2015 certified training center with a team of fully qualified professionals in the field of IT education & Trainings. With professional experience that dates back to 2005, the team comprises with a bunch of professionals, activities are focused in education, training & resourcing services with Soft Skill programs to bridge in to employability.